One of the main selling points of the 1.0 version of Ghost was a simpler update process.

Since the previous process was a true pain, as I once complained, I was really looking forward to a future where a simple command of ghost update would do the trick.

And it almost did, untill I ran into a not-so-clear error:

Fortunately, it was not my first time encountering it and I already knew it had to do with a lack of memory.

Since I wasn't really eager to temporarily resize my droplet or manually looking for processes to kill, I took the easier way out and simply rebooted my droplet: sudo shutdown -r now

It is not an approach I would recommend and I was only able to do it since I didn't care much for a potential downtime on my personal server but sometimes it does the trick.

However, it seems it wasn't even needed. As I noticed after upgrading this blog, everything works fine if you simply restart the ghost update process after the first error is encountered so keep that in mind. 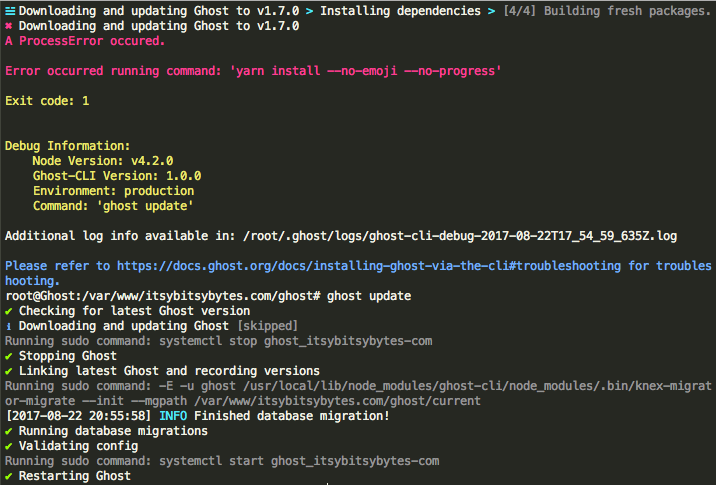 And there you have it! I am now running the latest version of Ghost and all it took was a simple ghost update command (kinda...)

How I moved my Ghost blog to a new domain

Fixing a 502 Bad Gateway error after a Ghost update

Backing up Ghost blogs with Python

In case your Ghost blog goes down